Monday 21st April: A few years back, Gollancz started their SF Masterworks series – reprints of classic science fiction novels ranging, in time, from H.G. Wells to Greg Bear. Being a science fiction fan of some years, I started buying these from the beginning, thinking that this was the kind of stuff I should be reading in order to call myself a proper fan. Sadly, a lot of the books written in the 60’s and 70’s were, for me, hard-going. For example, some were either commentaries on society at the time they were written (and I was not clever enough to understand what the authors were trying to say) or, more specifically, based on Hindu stories and totally beyond me. Some, especially anything written by Philip K. Dick, were very enjoyable even if I didn’t understand everything that was going on.

Recently, however, I have dipped in and read four more, all of which were more standard stories. 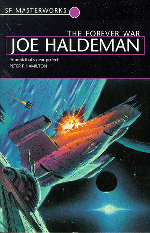 The Forever War (Joe Haldeman, 1974)
This thinly-disguised Vietnam War analogy sees William Mandela drafted into an interstellar war in which the huge distances travelled between missions mean that, although only a few years of his life pass, centuries go by on Earth, while advances in military technology for both sides seem to come from nowhere. Meanwhile, on Earth itself, the war is becoming more and more remote and humanity is evolving, sometimes with a little self-help, in order to avoid an over-population crisis.

Although only a short novel, the number of references to, I assume, the feelings of soldiers during the Vietnam war (in which Haldeman both served and was injured) are numerous – the inadequacy of military leaders and the subsequent feelings of the grunts to those leaders; the underhandedness of the military command; the ultimate futility of war – but the novel also succeeds in being a straightforward narrative, as well as a brilliant satire. In the background, a devastated Earth’s population is first controlled by encouraging homosexuality, then almost forcing it and finally by cloning suitable subjects. However, as a fail-safe, a few heterosexuals, including Mandella, are allowed to continue “as is”, even though they are now seen as freaks and, interestingly, Haldeman also says that, in this future, homosexuals can be cured if they wish to be.

Perhaps the best idea of this book, however, is that the developments in defence technology eventually lead to a final battle that is fought with medieval weapons – bows and arrows, spears and swords – until the last gambit, which uses what is essentially a doomsday weapon.

Gateway (Frederick Pohl, 1977)
Time dilation and homosexuality, albeit of the latent kind, is also apparent in the story of Robinette Broadhead who, in alternate chapters, comes to, lives on and eventually leaves Gateway and undertakes therapy (with a computer psychiatrist) for something that happened there.

Gateway itself is an asteroid orbiting our sun perpendicular to the planetary orbits. It was left by the now-vanished Heechee and contains hundreds of ships each with their own pre-programmed destination. People come to Gateway to take these ships out in the hopes of finding more Heechee artifacts (and, thus, riches). Some do, others don’t, still more never come back. The rest come back dead or seriously injured. It is the ultimate gamble.

Being of the “mysterious artifacts left by ancient race” sub-genre of SF, this was always going to be a winner with me, but Pohl partly builds his novel around the way that the Gateway Corporation runs its operation. The novel is sprinkled with classified ads, parts of classroom lectures, mission reports and other bits and pieces that build up a picture of life in and around Gateway itself.

The only disappointing thing about reading this novel was that the structure of alternating chapters, as the main story and the therapy converge towards one event, led me to believe that there was going to be a twist ending, one which I thought I had worked out (although not very far from the end). Ultimately, though, there was no twist and what I was reading was actually what happened.

Man Plus (Frederick Pohl, 1976)
No homosexuality in this novel, although there was lots of extra-marital (and even zero-gee) sex. In fact, it is extra-marital skulduggery that leads to the life of Roger Torraway being changed forever. As fourth-in-line for the Man Plus experiment, which aims to transform a man to be able to live virtually unaided on Mars, he suddenly finds himself thrust into the forefront when the current recipient of the surgical procedures suddenly dies of a stroke and the next two are ruled out. Torraway starts to undergo the procedures, as the team working around (and on) him try to solve the problems which contributed to he predecessors death.

So, Mars-forming man, instead of Terra-forming Mars, provides the main thrust of this novel and the increasing isolation of man, in the shape of Torraway, is the main effect of the experiment. The reason for the Man Plus experiment is, again, that Earth is falling apart (figuratively, not literally – small asides describe acts of terrorism, war and general discomfort with life on the planet) and the U.S. President is supporting the project as a future way of colonising Mars and thus relieving the effects of over-population. Every so often, the writing slips into a first person plural style (“we” did this, etc – I had to look it up), which leads you to think that there is something going on that is wider than the story you are reading and the last few pages reveal this to be true. To say any more, however, would be to spoil the ending.

This book is an easy, interesting read, if a sometimes uncomfortable one when you realise the lengths that the government is willing to go to its people in order to get what it wants. 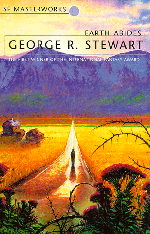 Earth Abides (George R. Stewart, 1949)
I normally only review books when I have finished reading them. However, this morning, I realised that my copy of Earth Abides has an undetermined number of pages missing from the end (they have been replaced by a second copy of the beginning of the novel), so it may take me some time to finish it.

Although definitely science fiction, this story of an Earth whose population has been all but wiped out by plague was set in the time it was written. Because of that, although a few details are now dated (valves in radios, attitudes toward black people, etc) it doesn’t read quite as dated as some future-looking SF (no ray-guns or flying cars…)

Isherwood Williams returns from a camping trip to find that plague has devastated America. After a road-trip between his native San Francisco and New York and back, during which he finds other survivors but feels neither the need to settle with them or ask them to go along with him, he settles back into his parents house and prepares to live a solitary existence. After a while he notices other signs of life and finds Em, who becomes his wife and they are eventually joined by a handful of others. A small community is formed and Ish tries to continue the aspects of civilisation that he remembers from the past. Unfortunately, it turns out not to be as easy as he expects.

It’s a shame that I’m going to have to wait to finish this book – it has been a fascinating read and one I could quite happily add to a list of books to re-read every year (if I had such a list). The writing is subtle, easy-going and although there is a sense of doom pervading the novel, there is (at least so far) a degree of hope.

Stewart peppers the main narrative with side-writings explaining how things will change now that man is no longer dominant, but these never detract from the main story. Superstition, religion, knowledge and law in a small community which by desire or otherwise has cut itself off are explored in detail. Although Ish is the main character and is seen throughout the novel as the educated man (he actually makes a list of attributes to show why he shouldn’t commit suicide early on) compared to the rest of the cast, the other members of the community are equally as interesting.

It sounds as though it should be boring. It’s anything but. I just hope the ending lives up to the rest of the novel.

Regular gig-goer in York, both to see local and touring bands. Huge music fan, with more CDs than my wife thinks any one person should own. I also collect American comics, read a lot of SF and fantasy and am a season-ticket holder at Leeds United.
View all posts by Ian →
This entry was posted in Books and tagged Frederick Pohl, George R Stewart, Joe Haldeman. Bookmark the permalink.