Sunday 8th February: It’s been a couple of weekends since I’ve seen any live bands, I haven’t bought any CDs yet this year and I’m currently halfway through a Robin Hobb trilogy. Put those three facts together with a distinct lack of free time over the last few weeks and you have the reasons why I haven’t blogged at all. However, I still like to think that I have regular readers (poor deluded soul that I am) and so thought I’d better write about something this weekend. The lack of usual topics left me just one option – comics. Now, I may be generalising (and I apologise if that’s the case) but one of the reasons that I don’t talk about comics much is that, for the most part, I find that people who are “into” them as much as I am (I’ve been reading comics for as long as I can remember, collecting for thirty years and have a current collection of over 17,000 individual issues) simply aren’t the sort of people I like hanging around with. It’s a fact that a lot of people I do know consider me to be a comics geek but, unlike most of the comics geeks that I have encountered (and I used to part-own a comic shop, so I’ve encountered a few) I go to football matches, use my gym membership, drink beer in places that aren’t associated with conventions and buy CDs that, in general, aren’t movie soundtracks. All of which can make it a bit pointless talking about comics. People who don’t understand comics aren’t going to be swayed by anything I write and those that do probably know everything I could say.

But, while most of the comics out there are still the (perhaps) under-rated super-hero titles, there is a subset of comics which are specifically written for adults. Vertigo is a sister company to DC Comics – the publisher of Superman, Batman and the like, – which publishes a wide range of adult titles, ranging from crime to Western and encompassing war, fantasy, horror, science fiction and many things in between. One of the best titles, in my opinion, that they have published in the last few years is Y: The Last Man, the title of which can be said to have multiple meanings. Started in 2002 and completed in 2008, this series tells the story of Yorick Brown, the only male human survivor of a mysterious plague that wipes out everything with a Y chromosome within a matter of minutes. Joined by Agent 355 of the U.S. government secret agency the Culper Ring, geneticist Dr Alison Mann who hopes to study Yorick to find out why he survived and Ampersand, a capucin monkey who is the only other males left alive on the planet, Yorick travels across the now female world in the hope of finding his fiancee, Beth, who was on an archaeological fieldtrip in the Australian outback when the plague hit. 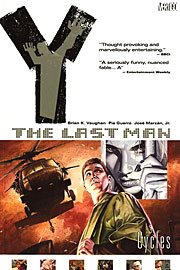 Y is one of Vertigo’s creator-owned titles. In this case the creators are writer Brian K. Vaughan, who wrote the whole series, and artist Pia Guerra, who draw the vast majority. It is also one of the titles that Vertigo allow to come to a natural end, a trend started when they published Neil Gaiman’s Sandman a few years back. No matter how popular these titles are, the creators have a fixed idea of the story they want to tell and when they reach the end of it, the title is effectively retired. Y: The Last Man lasted 60 issues or, the way I am reading it, ten collected volumes. The story contains intrigue, mysticism, action, humour, romance (yes, there is only one man on the planet but romance and, indeed, sex are everywhere, if you see what I mean…) and much more as Vaughan takes Yorick from New York to Washington, San Francisco, Australia and, in the volume I’m currently reading, Japan. Along the way minor and not-so-minor characters are introduced and expanded on and the effects of all males suddenly effectively disappearing from the face of the planet is investigated (at least from a the viewpoint of a male writer). 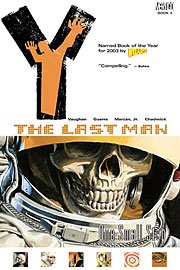 In some of the shorter arcs, Vaughan looks at how the lack of males would (might) affect the Catholic Church (in one of the bleakly humorous sequences a nun explains that she is scouring the planet for an immaculate conception because, while she believes that God will now allow females to communicate with him, she needs a man to ask God whether that is correct…), how drug trafficking would (might) become prevalent and how different groups of women would react to the sudden disappearance of men. At the same time he produces a page-turning epic that gradually answers questions while asking more and more. Perhaps it’s no coincidence that Vaughan is also a writer and producer on TV’s Lost. Reasonably early in the run, Dr Mann discovers how Yorick and Ampersand survived the plague. The questions then become: Why they survived? Who is looking for them? Whether they can save the human race from total extinction and whether Yorick will ever be reunited with Beth.

Oh, yeah and whether the baby conceived by a male astronaut in orbit when the plague struck and now alive in an air-tight “hot house” back on Earth will survive. And why agents of the Israeli army are liaising with Yorick’s mother, a U.S. Senator. And whether the same Israeli actually shot Yorick’s mother. And…. Well, you get the idea… I have deliberately avoided reading any details of the ending of the series but I understand that there is no cop-out and that the ending works really well. Personally, I can’t wait to get to it but, at the same time, I wish the story could go on and on. Filled with brilliant characters and superb storytelling, Y: The Last Man should be compulsory reading for comics fans to show that not everything out there consists of bulging muscles and spandex and for non-comics fans to show that comics can be intelligent, fascinating literature. 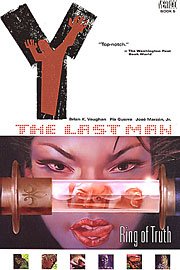 Unfortunately, one of the downsides of comics is that, compared to books (for example) page-for-page they are incredibly expensive. To buy the full run of sixty issues would have cost somewhere around £108. The ten collected volumes would be slightly cheaper, but still around £90 for something that amounts to about 1,300 pages of story but can be read a lot more quickly than any novel. Still, comics dragged me in a long time ago and refuse to let me go. I like most comics, especially the much-maligned superhero stuff. Once in a while, though, something comes along which really knocks my socks off and reinforces that old adage. Comics definitely aren’t just for kids.

Regular gig-goer in York, both to see local and touring bands. Huge music fan, with more CDs than my wife thinks any one person should own. I also collect American comics, read a lot of SF and fantasy and am a season-ticket holder at Leeds United.
View all posts by Ian →
This entry was posted in Comics and tagged Brian K Vaughan, Pia Guerra. Bookmark the permalink.