Tonight it’s a trip to the Duchess for what was, for me, the most anticipated gig of the year so far, with headliners Panic Room having released my favourite album of last year. Before them, however, were two support bands that we hadn’t seen before and knew very little about.

First on stage was Satori from York. Their set had begun when I arrived (after keeping Roj and his niece waiting outside for a short while due to a hole in the road on my trip in) and I think it’s fair to say that they grabbed our attention right from the start. I’m sure that, at one point, vocalist Stewart King said that this was their first gig. Whether that was actually as Satori I’m not sure – the MySpace link above is tagged Stewart King and the album, called Satori, is released as Stewart King. (Maybe King’s going the Iain Jennings, Breathing Space route…) Anyway, it was a very assured performance which included some varied songs, incorporating straight and melodic rock with a hint of blues influence. I don’t think there was a duff song in the set and King’s vocals, helped by a dose of reverb, came across as clearly as any I’ve heard at the Duchess.

Both Roj and I were so impressed with Satori that we splashed out the princely sum of £4 for a copy of the album. (Discussing limits of what we would pay, prior to wandering over to the merchandise area, we had settled on £10 – they really were that good). Satori, the album, is currently the soundtrack to this posting and, despite being a very quiet production is almost as good as the live set. Containing mostly songs that we heard tonight, it highlights the variety which was on show. Highlights for me are Embodiment Of Fire (which really reminds me of something else, but I can’t quite put my finger on it), Nothing Can Grow Here, (the sublime) Runaway and If You’re Going Through Hell, Keep Going. The band line-up on the album is different to the band that played tonight, with King himself apparently playing the majority of instruments, P. G. Branton (tonight’s drummer) playing on just four of the eight tracks and Paul Teasdale (Amberstone, Breathing Space) playing bass on S.A.R.

This was an excellent start to the evening and the album is definitely worth checking out (I know I can bang on about this at times but these small, unsigned, local artists often need all the support they can get and can you really go wrong for £4?)

Next on stage were Harrogate rockers Kasiuss and they upped both the energy noise levels. Satori may have set tonight’s bar but, for me, Kasiuss leaped over it. As, ever, I will point out that the rest of the group (we had now been joined by Andy), while liking Kasiuss, preferred Satori. Harder and heavier than the openers, but with some superb keyboard sounds occasionally rising through the crashing guitars, these guys had energy to spare and really seemed to enjoy playing. Unlike Satori, I had heard of Kasiuss before, but only because I knew that they had supported ZU2 a few weeks ago (and are scheduled to do so again in April). A couple of people mentioned a potential Muse influence but I’m a bit behind when it comes to listening to them, so can’t comment myself. Sadly, there is no recorded material available at the moment, but they are apparently going to be producing something soon – something else to add to my wish list. 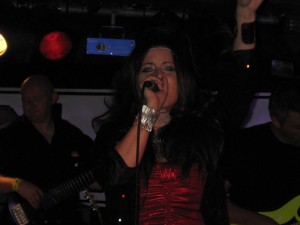 And so, looking like elder statesmen of rock compared to the support bands, Panic Room took to the stage. Would they be worth the wait? One of the things I was worried about was whether the band would be able to reproduce the mix of styles and influences prevalent on debut release Visionary Position. I needn’t have been. Although the set list was quite heavily biased towards the second, as yet unreleased album Satellite, the tracks that they did play from VP included some of my favourites – Apocalypstick, full of Eastern Promise, and seemingly Terminator inspired Elektra City are both epic tracks and, while the latter was a shortened version lacking the free-form jazz piano ending, both were played brilliantly. Indeed, the new tracks showed that Satellite will have as much, if not more, diversity. There’s more science fiction in Dark Star, I Am A Cat sees Anne-Marie Helder at her most provocative and encore song Satellite featured some superb guitar work from Paul Davies. An added bonus was Blood Red Sky, from Anne-Marie’s solo E.P. The Contact. The tracks above aren’t the full set list – just the ones I can remember. My only gripe – where was the brilliant Firefly???

For all the power of Panic Room’s music, this was a very quiet performance. There was little movement on stage, with the band seeming just to get on with the job of playing their music. Only Anne-Marie put on a true performance, gesticulating during vocals and moving about stage when not playing guitar (including a twelve-string for the encore). In some ways this almost seemed to put her in the limelight, with the rest of the guys being just her backing band. That’s a shame as they are incredibly talented musicians. I’m sure that it’s not an intentional impression and that they are aware of it – after all, it’s a bit difficult for Gavin (drums) and Jon (keyboards) to move around stage a lot – but maybe Alun (bass) and especially Paul (guitars) should come out of the shadows a bit more.

In spite of that, though, this gig met and exceeded my expectations and my anticipation was justified. Panic Room are as good live as they are recorded and we were lucky to have support bands of the calibre of tonight (bands that could easily headline any normal Friday at the Duchess).

Regular gig-goer in York, both to see local and touring bands. Huge music fan, with more CDs than my wife thinks any one person should own. I also collect American comics, read a lot of SF and fantasy and am a season-ticket holder at Leeds United.
View all posts by Ian →
This entry was posted in Live Music and tagged Kasiuss, Panic Room, Satori, The Duchess. Bookmark the permalink.