Posted on November 29, 2009 by Ian
…and it’s a “tear-in-the-eye” evening for York music fans as The Yards play their final gig at the Duchess. Roy and I (sometimes referred to as the B-team) are attending to say “Hail and farewell!” to one of York’s finest bands.
First up, though, are The Federals. We’ve seen them before (during our first visit to the Duchess) and, as a package, they aren’t really my thing. I can’t remember whether any of the songs they played tonight were on the set list the first time we saw them but, looking back on the post for that night, my overall opinions hasn’t really changed. Their songs are short, sharp shocks to the system, with some pretty good musician-ship. Unfortunately, there is little variation in style or content. The band also need a good lyricist – currently their songs are pretty much one-line repetition, with little or no meaning and the words are more shouted than sung. More punk than garage, in my opinion, and I’m not a big fan of either. As I said last time, The Federals are good at what they do, it’s just that what they do isn’t for me.

But, we weren’t there for The Federals, we were there for The Yards. Frontman Chris Helme set out his stall early one by stating that, although this was their final ever gig, they didn’t want it to be a sombre occasion and that they were aiming for their best gig ever. They then started the first of two sets, featuring their more mellow output. This gave us what seems to be a rare chance to see guitarist Chris Farrell standing almost still and hear Helme’s incredible vocals with clarity (if only the place wasn’t half full of people who had turned up to chat – honestly, if they want to talk to each other, why bother buying a ticket for a gig???)
Intermittently throughout the evening, the band was joined by guest musicians (Alan Leach, drummer from Shed Seven, on a rather large bongo drum, and two ladies whose names I didn’t catch on violin and cello) as well as being permanently joined by backing vocalist Andrew Stone (or, possibly, Stowe – apparently a talented singer-songwriter himself but, I’m afraid Google has let me down info-wise…) With keyboard-player Jon Hargreaves also providing vocals, this gives their songs an almost unique harmonic and the strings added an extra dimension to an otherwise fairly standard rock gig. 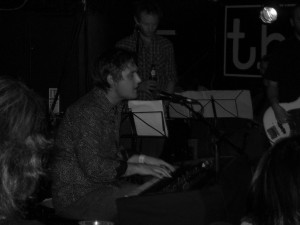 Speaking of rock, the second set featured the band’s heavier, louder output. With songs from both studio albums, as well as at least one from the live gig in York Minster a few years back, we were treated to what was, essentially, The Very Best of The Yards, including my favourites Cars and The Devil Is Alive And Well And In D.C. (written when the world was a bit sh*t…). There really wasn’t a duff song in the two sets and, with the heavier stuff we got to see Farrell cut loose a bit with the guitar (although not as much as the first time I saw him perform).
Was it a fitting farewell? Well, it was a really good gig but, for me, it lacked something, I don’t know, “monumental” maybe. I mean, there was nothing bad about it but I can’t help but think that the occasion was getting to the band a bit and that they weren’t perhaps giving their all, despite Helme’s comment at the beginning. It was a better-than-good gig, it just wasn’t a great one.
And so another chapter of the York music story closes. Was it a big chapter? Perhaps not. The Yards had been together seven years and only released two studio albums. They seemed, to me to play only intermittently. While I haven’t been gigging in York for too long, I’ve only managed to catch them twice (and missed them twice). They did, however, produce one of my favourite “local” albums in Imperial Measures – a worthy addition to any music fans collection. And how many bands can boast that they have played York Minster twice?? So, in the long run, the closing chapter may not be a big one, but there’s little doubt in my mind that it was an important one. Charismatic frontman Helme has already release a solo album and there was a promise that there was more to come from all the band members. There has been no mention of why the band are splitting up so I can only assume that it’s a friendly break.
R.I.P. The Yards and good luck in your individual endeavours.

Regular gig-goer in York, both to see local and touring bands. Huge music fan, with more CDs than my wife thinks any one person should own. I also collect American comics, read a lot of SF and fantasy and am a season-ticket holder at Leeds United.
View all posts by Ian →
This entry was posted in Live Music and tagged The Duchess, The Federals, The Yards. Bookmark the permalink.