Tuesday 16th March: I hardly ever properly listen to music on the radio (unless I’m in the car, bored of whatever CD is playing and there’s no football on). The half hour or so I hear on a morning is perfectly designed to get me out of bed and out of the room. There’s just too little that’s good in the mainstream for me. So, it was a bit of a surprise to me when, a couple of years ago, I seemed to not only hear a certain song whenever the radio was on, but that I actually thought it was brilliant. A catchy tune, good lyrics and a stunning Scandinavian-like voice all combined into something that was different to the average chart-bound love song.

Typically, as always happens when you hear a song you like (or one you recognise but can’t remember who sang) I always seemed to miss the presenter announcing it and, for weeks went without knowing who it was that had musically captured my heart. Then, something made me look it up on the internet. (I don’t know what it was, but I can remember that it happened while Debbie and I were watching the Hootenanny on New Year’s Eve 2008.) Imagine my surprise when the mysterious Scandinavian turned out to be a 19 year old from a suburb of Glasgow…
Anyway, I ordered the album and, when it arrived, was immediately impressed. Incredibly powerful and intelligent lyrics combined with excellent music to produce an instantly likable album. That was This Is The Life, the debut album from Amy MacDonald. Fast forward just two years and a promotional email drops into my inbox, enticing me to spend money by pre-ordering Amy’s second album, A Curious Thing. A signed copy, no less… How could I refuse? 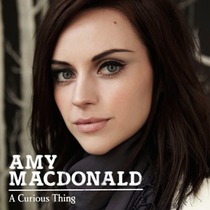 Unfortunately, Amy’s sophomore outing didn’t grab me as immediately as her debut. Fortunately, though, it has grown on me the more I have played it.
The lyrics might be a little less simple than some of the older songs but the very unique and, at times, biting commentary on the highs, lows and perils of fame and the famous are still present. An Ordinary Life shows Amy’s writing at her best, telling how she wishes she could stay ordinary despite her now worldwide fame. The Next Big Thing is a swipe at X-Factor style reality shows, while This Pretty Face is this album’s equivalent of Footballer’s Wife – a derisive look at the world of celebrity culture.
Mixed amongst these are varied tracks which all seem to be somehow personal. The soaring end track, What Happiness Means To Me, is about as close as Amy gets to a traditional love song. My Only One is a message to an unknown someone and Love Love tells how perceived and real love are different.
Musically, the album is much more complex than This Is The Life, with strings, pianos and electric guitar playing alongside Amy’s acoustic guitar. As part of their mutual fan club, Paul Weller plays on two tracks and the focus is shifted between instruments in different songs. The jangly piano of This Pretty Face is somehow reminiscent of Western saloon bars, Troubled Soul has an incredible drum line while something about Love Love reminds me of a more traditional tune, livened up into a pop song.
Vocally, Amy is pretty unique. Her deep voice belies her age and I was surprised (again) to hear her briefly speak at the end of the hidden track, an acoustic cover of Springsteen’s Dancing In The Dark, as her spoken voice is definitely that of a young woman. There’s also no doubting that she is a talent – with two albums of self-penned songs under her belt at the age of twenty-two.
I have to say that A Curious Thing isn’t as good as This Is The Life. But has more to do with how brilliant the first album was. There’s nothing fundamentally wrong with the follow-up but it was always going to be hard to top the debut. It’s definitely a grower, though, and yet another worthy addition to my CD collection.
My version also includes a second disk – with Amy playing live at Barrowland Ballroom in 2007, about the time that This Is The Life was released. Containing all the songs from the first album, alongside a handful of covers (Caledonia, Fairytale Of New York and Mr Brightside) this shows just how good a live performer the young Amy was. Her distinctive voice, left virtually unproduced, seems deeper and gives the impression that she is singing while swallowing her vocals, which is a little unusual at first but you soon get past that. As a fan of live music, this was a welcome extra to my purchase.
Track Listing:
1: Don’t Tell Me That It’s Over
2: Spark
3: No Roots
4: Love Love
5: An Ordinary Love
6: Give It All Up
7: My Only One
8: The Pretty Face
9: Troubled Soul
10: Next Big Thing
11: Your Time Will Come
12: What Happiness Means To Me
All songs written by Amy McDonald
Musicians:
Too many to mention.

Regular gig-goer in York, both to see local and touring bands. Huge music fan, with more CDs than my wife thinks any one person should own. I also collect American comics, read a lot of SF and fantasy and am a season-ticket holder at Leeds United.
View all posts by Ian →
This entry was posted in CD Review and tagged Amy McDonald. Bookmark the permalink.