These and the Other Guy – Self-titled 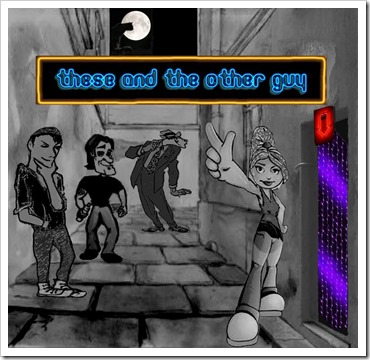 The various characters depicted on the cover of These and the Other Guy’s self-titled debut album go some way to illustrate the melange of styles found within, while the location hints at the kind of place you would, perhaps, be most likely to find their music being played.

The album opens with Follow The Money a song about greed which has a slightly Latin American sound, with a guitar section – electric yet still bringing to mind Spanish style – taking over in the middle. The lively Put That Down, just released as a single, starts the most prevalent, over-riding, style on the album. Its lively Jazz sound is underlined with a catchy rhythm section melding with piano behind subtle guitar, harmonica and clarinet. When I saw the band perform live a couple of weeks ago, Chocolate was the stand-out track for me. The album version only serves to highlight that. With its harmonica-influenced Blues feel, it is just as silky, slow and sultry as I remember it. While there is a certain out-of place Americanism to the lyrics in referring to a “candy jar”, I can’t think of anything else that would fit. It does contain one of the two examples of incongruous male-written but female-sung lyrics on the album but, again, this can be forgiven.

I imagine that every red-blooded man can appreciate the sentiments of When You Watch Those Girls, which uses brass to give a lively big band sound. The simple lyrics, emphasised by liberal use of echo effects, are broken up by an easy-rock guitar and keyboard section, which goes a long way to keep the track interesting. Time To Go takes the sound into yet another direction. This time there is a distinctly Middle Eastern feel both to the music and subtly near-chanted vocals, the latter backed in places with wordless wails. Like a Queen is another song about greed and one of the few on the album where I can’t pin down the influence. The unobtrusive rat-a-tat rhythm, which somehow manages to include the backing vocals, combined with vocal cadence reminds me of something but I can’t think what.

Where Did My Children Go is the most sombre track on the album. It is there to raise money for the War Child charity and is, basically, a mother asking the question. Lyrically it is subtle, sad and suddenly brutal and hard-hitting, with a deep brass background giving it even more of a solemn air.

The piano-led I Just Fell, together with it’s lovely vocals and clarinet bring to mind the sort of easy-listening associated with background music in upper-class restaurants – a grand piano played by a suited pianist and a vocalist in an evening dress (think The Fabulous Baker Brothers). It is a quiet diversion that sits nicely in the middle of the album before the clarinet is used again to open the more lively jazz-like Leave Them By The Door, which invites you into a metaphorical club where you can leave all your troubles, as well as your history, behind, if only for a short time. The Jazz continues, but this time mixed with breathy, sultry, Blues-styled vocals, in My Girl, before yet another change of style in Wasted Way To Live, which opens with a near-jig before morphing into Country. This a list-song, in a similar style to Alanis Morissette’s Ironic. Whereas the more famous song used examples which probably weren’t ironic, this time the listed examples more than adequately show the futility and confusion of being in love and contains my favourite lyrics. (Who can’t love the idea of “blindfold karate”?)

Switch On The Radio returns to an Easy-listening style and there are a couple of (brief) warbles in the vocals that bring to mind Edith Piaf. There’s something about Feels Like Forever, that I can’t put my finger on. The piano opening suggests one direction before the vocals seem to take it in another. The harmonica once again suggests Blues but the rest is, to me, unplaceable, while still being pleasant. Don’t Reckon You Do ends the album on a definite Bluesy note, however.

The whole album is underpinned (or should that by over-arched?) by Alex Botham’s versatile and emotive vocals. Supported but never over-powered by the male backing vocals, except during Wasted Way To Live, in which she provides her own backing, she seems to switch effortlessly between genres while still having a distinctive style. The album has been mixed superbly, with all the instruments and vocals coming across very clearly and, with fourteen tracks, represents great value. Despite some of the livelier tracks included on it, the overall feel is of a very relaxing album, just the thing for chilling to after a hard day at work. Maybe with a glass of red wine and, possibly, a bar of Green & Blacks Mayan Gold at the ready for when track three comes on.

Regular gig-goer in York, both to see local and touring bands. Huge music fan, with more CDs than my wife thinks any one person should own. I also collect American comics, read a lot of SF and fantasy and am a season-ticket holder at Leeds United.
View all posts by Ian →
This entry was posted in CD Review and tagged These And The Other Guy. Bookmark the permalink.