Male/female duos were the order of today with only final act Dream of Apollo bucking the trend (although even their acoustic quartet format was made up of an even split).

First up were Jane Stockdale and Chris Bartram as To The Blue. I’m sure as I walked in I heard Chris describe their music as something that could be listened to in the background

and, if they are happy with that, they were probably best suited to the late afternoon crowd who were there, arguably, more for the food and drink than the music. As they opened their set with a cover that I didn’t recognise, the first thing that struck me was how much Jane’s voice reminded me of Briana Corrigan (The Beautiful South), although as the set went on there seemed to be less similarity. The duo took turns at providing lead vocals, depending on who had written the song, but the overall harmonies were lovely despite, it seemed, being disrupted by every small truck making its way through York. Songs about the end of a relationship (Fly – much happier and more joyful than its subject perhaps suggests), or inspired by paintings (Silent Lands, inspired by Jack Butler Yeats’ On Through The Silent Lands) or the characters met while walking the Ridgeway (Rooted To This Land, I think) mixed with the likes of the more traditional folk-sounding Three Gypsies, which was dedicated to Martin, the brilliant soundman for the festival, who really doesn’t like folk music. “This is as heavy as it gets,” said Chris during a bright and lively, Summer song based on a (nearly) true story from a Greek holiday. Martin flashed the Devil’s horn’s back at them. Standout song for me was We Are All One, a serious song whose lyrics seemed to portray all the world’s ills but whose chorus was hopeful. Predominantly a gentle set, with songs inspired by life and family, with dual vocals always clear above Paul’s subtle guitar, it was ended in lively fashion by New Sun Rising, a song years in the writing.

Next up were Two Reasons Why, a band barely a year old. Joe Baker’s guitar work was a

bit more “plucky” or finger-picking in style than that of To The Blue in more than a few places and Lucy Williams’ vocals were simply stunning, mixing high and light with moments of more power. The duo’s single, Foxes Den, and covers of Alex Clare’s Too Close showcased how emotional those vocals could be, as did another cover – Bonnie Rait’s I Can’t Make You Love Me, during which the sadness came through in waves. Their own songs, stretching from A Place To Call Home, the first one the duo wrote together, to a new one (the title of which I didn’t catch) were equally impressive, especially the final, unintroduced one, which brought the all-too-short set to a soaring end.

When I first saw According To Eve, two years ago in almost exactly the same spot as tonight, I noted that they were worth looking out for. I’m just sorry it has taken that amount of time for me to catch up with them again. With the previous acts finishing slightly ahead of schedule, this duo of Eve Maule-Cole and Tim Downie took full advantage to deliver a longer set combining covers with their own material, Tim’s intense, stoic stare counterpointing Eve’s huge smiles. Tim’s guitar playing is, arguably, the most complex of the night so far as he uses the guitar body to provide percussion and is described by Eve as 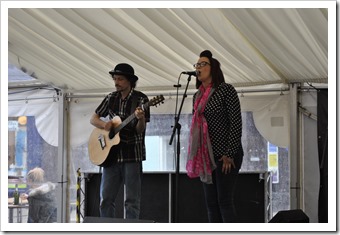 “mind blowing” in her introduction to one song. They opened with a cover of Bill Withers Just The Two Of Us, Eve’s vocals soft and breathy, before moving on to the more soulful Everybody Says (a.k.a The Sneezing Song). It’s normally magicians who ask the audience to volunteer a five pound note but, in this case it was needed for musical magic, threaded through the guitar strings for a version of Bob Marley’s Is This Love. Blind Eye drummer Joey Leyland just about managed to grab it back before Tim dropped it into a charity bucket. It seemed that the set list hadn’t been decided in advance and when Eve told us that Paul Weller’s Something To Me was up next a surprised Tim hastily grabbed a capo from his back pocket and tapped a pedal to change effects. The set was briefly interrupted when a delighted Eve spotted a motorcyclist’s furry, muppet-like helmet just outside the marquee and then, after after the slightly funky No Shadows and despite her insistence that they performed covers because they were better than their own songs, the audience chose to hear another original. Tim’s fingers seemed to be all over the strings of his guitar as he played in an atmospheric, echoey style. More covers followed, including a Marvin Gaye, Beatles medley, before the next original. Better Mentality, explained Eve, “is quite loud. It might smash a few glasses.” Luckily the glasses were plastic, which she took as a challenge before lulling us with a gentle opening which led into the much louder, powerful, sassier, chorus. Eve has a great stage personality, peppering the bits between (or even during) songs with snappy humour. We were told that a passing fire engine was out of key and that the fact that Muse did a version of Nina Simone’s Feeling Good makes her sad. After a story about them learning Eye Of The Tiger (because the opening of The Doobie Brothers’ Long Train, which they closed the set with, sounds like it) for a recent gig, she refuses to be drawn into performing it again, instead good-naturedly telling Tim to, “Play, monkey, play”. Overall this was a brilliant performance, bags of talent and personality and I definitely hope it doesn’t take me two years to see them again.

Finally, old favourites Dream Of Apollo took to the stage. Despite having seen them at the majority of their York gigs since 2011, this band always seem to manage to surprise me.

Tonight, sounding better than I have ever heard them, (thanks again to Martin who, I may have mentioned, is doing an incredible job on the sound) they did it again. With a set mostly comprising of familiar songs from their album, Alpha, such as Hold Me, Sandman, Anatole, Children Of The City, Home, Regrets Of The Devil and Vicki’s favourite, All For You, they managed to drop in an old song that I hadn’t heard before. These Tales was, however, unmistakably a Dream Of Apollo song, not just because of Vicki’s distinctive vocals but because it contained hints of other songs that have come after it. It’s always nice to hear n

ew material, even if it is old. As usual, covers were dotted around the set – Eleanor Rigby and Put Your Loving Arms Around Me, with Folsom Prison Blues hastily re-added because, “We were going to do Come Together but you’ve (According To Eve) already done it better,” together with a new version of Chaka Khan’s Ain’t Nobody, extending the band’s repertoire of genre’s even more. Away from the music, there was the usual on-stage banter, with Vicki explaining that having just had to complete a health and safety assessment to be allowed to busk in London, she was now constantly worried about how she might accidentally kill somebody with a guitar lead or throw a mic stand at them and that it had brought a new edge to her playing. Best of all, though, was Winston’s off the cuff, “We’ve been Dream Of Apollo and our next gig is in Italy…”

Regular gig-goer in York, both to see local and touring bands. Huge music fan, with more CDs than my wife thinks any one person should own. I also collect American comics, read a lot of SF and fantasy and am a season-ticket holder at Leeds United.
View all posts by Ian →
This entry was posted in Live Music and tagged According To Eve, Dream of Apollo, To The Blue, Two Reasons Why. Bookmark the permalink.