As day four of York’s Little Festival of Live Music drew to a close, we made a quick(ish) dash across town to The Basement to catch as much as we could of Toby Burras’ EP launch gig.

By the time we got there Leo James was already on stage, performing a mix of covers and originals. Clear vocals and the fact that the audience was, for the most part, so quiet and

appreciative (a theme for the whole evening) made for a very enjoyable listening experience. The first full song I heard was a cover of Arctic Monkeys’ Fluorescent Adolescent. Next up was his own I Only Pray When I’m Desperate, the lyrics interspersed with wordless sections of vocal gymnastics. A joke told while he was tuning his guitar brought forth groans from the audience before another cover, this time My Faults (Imagine Dragons, I think) quietened them again. Madonna’s Like A Virgin got the Leo James treatment next and this was a much more laid-back version than the original. Leo almost apologetically introduced the next song, Pull Two Down, as a solo version of one he normally plays full band, which includes brass, guitar and percussion, describing it as “bare” and asking us to “imagine a groove behind it.” The full version may well be better, but the version we got tonight was good enough in its own right. Leo finished with another cover, “because that’s what people like”. This time it was Pixie Lott’s Mama Do, a song as new to me as one of his originals which, to be honest, I would have preferred.

Toby was acting as compere for the night and introduced Stu Freestone as “the best poet in York”. Now I don’t normally “get” poetry but Stu, who is about to take his Spitting 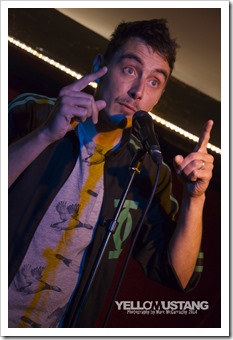 Feathers show to the Edinburgh Fringe festival gave such an expressive, impassioned performance that I found myself dragged in. Starting with Shane Koyczan’s Remember How We Forgot before moving onto his own Hope, which, if I have interpreted it correctly, is almost a protest against materialism, Stu displayed both an impressive memory and a flair for inflection and imagery. With only a short amount of his allocated time remaining, he left us with Hip Hop Handshakes which, again if I’ve got it right, seemed to look back on the stages of a lost youth while, at the same time, telling us to embrace opportunities. Stu might not have completely changed my opinion of poetry but I certainly wouldn’t be averse to seeing him perform again.

Compared to the way he introduced Stu, Toby seemed almost speechless as he introduced the next act. Ruby Joy is the young girl he told me he had been mentoring when I interviewed him a few months back. (If you haven’t read that interview, you can find it here.) Just thirteen years old, he puts her on at every gig he can and we were soon to realise why. Barely bigg 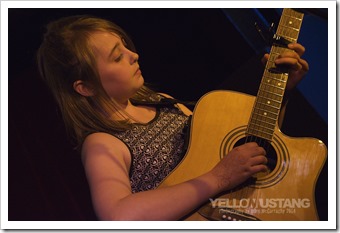 er than the guitar she played Ruby took to the stage without a hint of nerves and played a short set of covers that, once again, had the audience enraptured. Bastille’s Pompeii, Avicii’s Hey Brother, TLC’s Waterfalls, Shakira’s Can’t Remember To Forget You and Olly Murs’ Troublemaker were all played brilliantly, with a sweet little, “Thank you, “ and a sip of water between each. With some incredibly powerful vocals in places, some superb guitar playing and a mix of styles, including added percussion from the guitar body, that belied her lack of years, Ruby showed that she is another of the young musicians around York at the moment that, in the not too distant future, are going to be a force to be reckoned with on the local scene.

You may have seen Toby Burras/Unfinished Drawings busking around York. He’s the one in the baggy hat, usually playing in St Helen’s Square or outside Cafe Rouge in Petergate. The quality of his laid-back renditions of songs from the likes of Red Hot Chili Peppers and Daft Punk had already surprised me, as did his frankness, friendliness, humour, eloquence and passion about his job (and music in particular) when I interviewed him. Tonight, he surprised me for a third time. He opened with a cover of Rudimental’s Waiting All Night, a song I had heard him perform before, although not like he did tonight, using extended 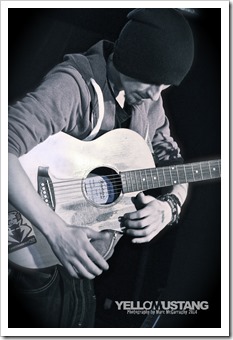 guitar techniques (and, I assume, the Basement’s better sound system) to punctuate the intricate guitar-playing with echoing percussion. And this style continued throughout his set, if anything getting more complex as it went along.  After taking time out to thank Ian Dongahy, in particular, for supporting him in his musical endeavours, a slight giddiness took over as Toby introduced the first track from his EP. “I don’t know what number track it is. I don’t even know how I made an EP,” he grinned before playing the quietly atmospheric Today. After displaying some good-natured quick wit – “I preferred you asleep, I’m not going to lie.” – while dealing with an audience member who was, shall we say, slightly the worse for drink (and who soon disappeared), Toby followed Jamiroquai’s Love Foolosophy with Mistakes, another beautifully atmospheric track from the EP, the first time he had performed it live. Somewhat appropriately, he explained, to laughter from the audience, that it had gone wrong during the sound check. More covers followed – Modestep’s Sunlight and then, joined on stage by Rachel Croft (her height prompting Toby to ask whether anybody had brought along a Yellow Pages that he could stand on), a jazz-like version of Michael Jackson’s Billie Jean which, although featuring some lovely two-part harmonies, saw Toby’s vocals taking more of a back seat to Rachel’s slow and sultry ones. “What’s my favourite song?” he asked on audience member, who immediately and correctly came back with the next song to be played. Again I’m not familiar with the original but this version of Justboy (Biffy Clyro), again with Rachel helping out on vocals, was just brilliant. All too soon it was time for the final song, “The song” as Toby described it. The beautiful Ciara Star, title track of the EP, ended a set of superb music (I’m not sure whether time constraints meant that I Could See It, the other EP track, didn’t get played or whether I just missed it). It wasn’t long before Toby was smilingly greeting a queue of friends and fans at his merchandise table and, from the looks of it, most people had been paying a fair amount for a copy of the EP, even though he had suggested that they could have a copy for nothing if they wanted to take one. If you have seen Toby perform on the streets of York you haven’t seen a fraction of what he can do. Look out for Unfinished Drawings.

Regular gig-goer in York, both to see local and touring bands. Huge music fan, with more CDs than my wife thinks any one person should own. I also collect American comics, read a lot of SF and fantasy and am a season-ticket holder at Leeds United.
View all posts by Ian →
This entry was posted in Live Music and tagged Basement Bar, Leo James, Ruby Joy, Stu Freestone, Toby Burras, Unfinished Drawings. Bookmark the permalink.