I have never been to a gig in a church before, let alone queue up to get into one. It was strangely amusing that, after being advised to have our tickets ready by the usual security-type seen at most concerts, those tickets were checked by, and we were shown the route to our seats by, what appeared to be the usual staff (volunteers, maybe?) of the Minster. Having chosen upstairs seating when we booked the tickets, on the basis that they should give a better view, it was a little disappointing to find ourselves about as far from the stage as you could get. Still, by pure coincidence, those seats meant that tonight turned out to be the first time I have been to a gig and become a fan of a band who weren’t even on the bill. Hopefully, there will be more about that in a future post.

Still, the seats gave a good, if distant and slight restricted, view of the stage and a chance to look down on the majority of the audience. And a mixed audience it was – mixed in with the array of inevitable Prog t-shirts (I spotted Opeth and Pineapple Thief along with my own Touchstone and the obligatory Anathema) were suited, middle-aged gentleman and denim-clad, mohicaned rockers. Bizarrely, there were a number of people wandering around this beautiful setting with pints of beer. I never did find the bar…

Support tonight came in the form of Anna Pheobe. Well, Anna on violin and Nicolas Rizzi on guitar – half of the usual band line-up. Between them they played a fully-instrumental set during which, at times, the violin and guitar both played alongside each other and, at 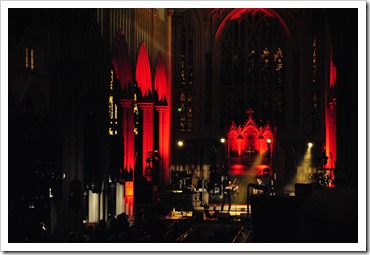 others, weaved in and out of each other, while the deceptively simple lighting cast huge shadows on the wall behind the players. The music, made up from a number of influences, varied greatly – lively violin, intricate guitar; softer, gentler, calmer violin and  almost a keyboard sound from the guitar; often light, occasionally slightly darker – and seemed to be telling stories, or at very least leading the audience to create their own stories from it. Despite the acoustics being superb, it was sometimes difficult to hear what Anna was saying between songs and the only track name I picked up for definite was A Moments Deception – a track which, on the Between The Shadow And The Soul album, features a guest appearance from Jethro Tull’s Ian Anderson on flute. After finishing what was supposed to be their last track, Anna realised they had time for one more and chose an energetic, jig-like track named after a tiny Irish village, Ballingoola, before the pair, full of smiles and pronouncements of how much they had enjoyed playing, headed off to sign CDs and chat to new fans. Yes, I was one of those new fans.

Strange as it may sound, there was something gloriously “live” about Anathema’s performance tonight. It wasn’t perfect. Slight mistakes crept in as Danny Cavanagh, at times nervously, built up complex loops on his guitar, using it for percussion as well as riffs and licks. “I’m basically spending the whole gig hoping I don’t mess up,” he confessed later on. The trio opened with The Lost Song, part 2, from their latest album, Danny taking to the stage first, followed by brother Vincent and then Lee Douglas, her stunning vocals filling the church, leaving nobody in any doubt why she won best female vocalist in the 2014 Prog magazine readers poll. After Vincent announced that they were honoured to be the first band to play Leeds Minster (and, being fair, they’ve set the bar very high for whoever follows) the two-part Untouchable, with its three-par 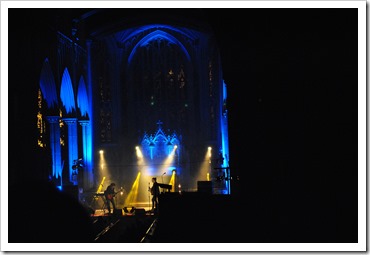 t harmonies, keyboard section from Danny and audience sing-along, elicited a, “Wow!” from a woman sitting close to me. After Dreaming Light, stunning in its simplicity, the same woman breathed an extended, “Wowww!” A drummer, cellist and extra guitarist appeared on stage for a version of Anathema so superb that it brought a lump to my throat. A “rethink” of Ariel was followed by Electricity, an older track that I wasn’t familiar with. Danny, back on keyboards as well as taking over lead vocal duties, introduced it as never been played before (acoustically, I assume), quipping that he didn’t care if he got it wrong because he was having such a good time. So was the audience. Temporary Peace – a fan favourite from back in the day, that day being further back than I have been in the band’s catalogue – The Beginning And The End, and then a huge guitar percussion sound resonated through the church to open Distant Satellites, a series of lights pulsing along to the second half beat. With just the brothers on stage for Take Shelter, its more simple guitar line building to a loop as they left the stage to cheers and huge applause, mean that the eventual shouts of, “More!” were bound to be heeded. 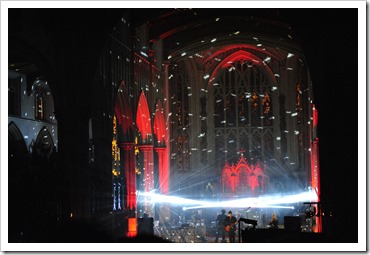 Indeed, it wasn’t long before they were back on stage for Internal Landscapes and then joined once again by Lee for A Natural Disaster, with Vincent asking the audience to hold mobile phones aloft to recreate an image from the Universal live DVD. More than a few complied but the church sprang to life when a number of previously unseen spotlights were aimed at so far unused glitter balls, throwing spots of light across the whole of the interior of the building. Lee’s vocals and Danny’s piano faded out the track before evening ended with the shorter, but no less impressive Fragile Dreams and the trio left the stage as the music, once again, continued to loop.

No review, let alone one of mine, could truly capture the magic, majesty and beauty of tonight’s gig. Stunning music in a stunning location. I don’t often travel away from York to see gigs these days, but I’m glad I travelled to this one. On the basis of just two albums, I rank Anathema as one of my favourite bands and, while I would love one day to see them perform as a full, electric band, this acoustic performance will more than do for now. Without doubt it is going to take something special to knock this off my gig-of-the-year spot.

Regular gig-goer in York, both to see local and touring bands. Huge music fan, with more CDs than my wife thinks any one person should own. I also collect American comics, read a lot of SF and fantasy and am a season-ticket holder at Leeds United.
View all posts by Ian →
This entry was posted in Live Music and tagged Anathema, Anne Phoebe. Bookmark the permalink.