It’s funny how things work out sometimes. I had just been discussing how more and more I was seeing bands I knew I liked and discovering less and less new music, compared to a couple of years ago, through live performances, as well as how support bands often seemed to get short shrift in terms of sound quality at gigs, when three guys, dressed all in white – no, it wasn’t a Bee Gees tribute act, this was Canadian rock band Blurred Vision – came on 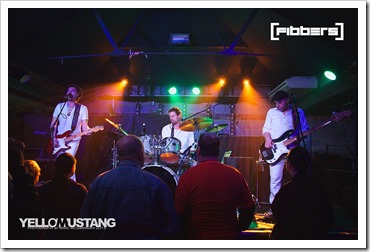 stage to a spoken word backing track comprised of quotes from the likes of John F. Kennedy and John Lennon and, by the end of their set, blew me away. Initially Ben Riley’s almost militaristic drum beat was all but overpowering the guitar of Sepp Osley, but the latter’s vocals were coming through incredibly clearly during set opener No More War. The track’s quieter mid-section and explosive ending was greeted by what seemed to me to be somewhat lacklustre applause given the number of people already in the venue. I don’t know whether Sepp thought the same as he announced that the trio would be carrying straight on with Rollin’ On, which started with a powerful, slightly histrionic guitar sound, which soon slowed down to something that, if downtuned, could have been described as doom-laden. As it was it was very listenable, especially when it turned proggy in the second half. By now, I was hooked and it seemed that the audience were taking more notice, the applause growing with every song. Tonight, continuing the track-listing from the band’s debut album, Organized Insanity – lauded by Prog magazine as one of the best of 2015 – featured a keyboard sound, although it wasn’t clear whether it was from a backing track or pedal. Whatever, the track had an anthemic build from the off. The keyboard sound 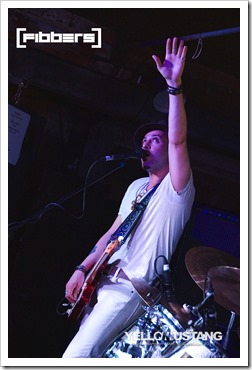 continued into Long May You Run – soon to be featured in Vampire movie Manhattan Undying – its moody opening leading into a nicely atmospheric mid-section. The Keeper was a “mystical love story” which took the audience back to the ancient lands of Persia. (Sepp and brother Sohl, on bass, have Iranian roots.) The energetic start soon took on a Middle-Eastern sound, with some lyrics, “sacrifice their beating hearts” for example, seemingly belying the love song tone. Riley alternated effortlessly between calmly bashing the life out of his kit and using cymbals to add to the over-riding Middle-Eastern tone of the song. The album’s title track was the hardest rocker of the set and included some impressive triple vocals. Arguably, though, the band saved the best for last. Sepp gave a rousing introduction to a cover that launched the band’s career, pronouncing it a rallying cry for freedom in Iran. The song itself was a version of Pink Floyd’s Another Brick In The Wall, amended not only to give it a Middle-Eastern feel in places, but with the word “teacher” replaced with “Ayatollah”. If the introduction was rousing, the song was even more powerful and drew a great reception from the crowd. I have to admit, I hadn’t heard of Blurred Vision before tonight, when they became the best new support act I had seen for a long time. 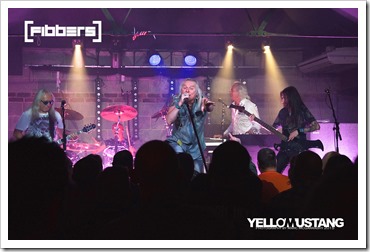 From a new ban 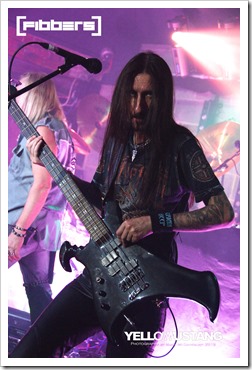 d to one of those that I had seen before and know I like, even though I still only own a fraction of their twenty-plus studio albums. I can’t quite believe that it is over six years since I saw Uriah Heep at The Duchess. Then I was a complete newbie. I had heard of the band but couldn’t remember hearing anything by them, but that didn’t stop me ranking that gig as my favourite of 2008. Inevitably during their forty-five year career, there have been a number of line-up changes, with only guitarist Mick Box being ever-present. Tonight’s line-up, though, was pretty much the same as back in 2008, with only Davey Rimmer, replacing local boy Trevor Bolder, who died in 2013, on bass.

By now the crowd had swelled to a large and diverse audience and the venue’s air-conditioning unit had been switched on, this time providing welcome relief, rather than annoying cold. It was great to see that, while many of the audience seemed old enough to be long term fans, the band are still gathering younger supporters. One young blonde lady could be seen having a great time at the front while, I’m 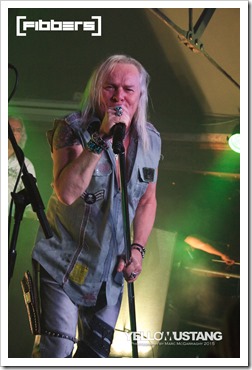 told, two German sisters, also at the front, had been following the band around the world.

As the lights dimmed the crowd cheered. As the first members of the band came on stage the crowd cheered. A frantic drum-line greeted Mick Box as he walked on and there was another cheer. Then as cheeky-chappie vocalist Bernie Shaw appeared, giving the first of many thumbs-ups to the crowd, they cheered again. With Outsider released last last, tonight’s set list included a fair dollop of songs from that album, including opener Speed Of Sound, but there was also a healthy nod to the band’s back catalogue. The Hanging Tree was greeted by a sea of clapping hands. At the end of it, Shaw asked the audience whether they had heard all of it. “More than I f*cking did,” he said when we replied in the positive and a brief pause ensued as technical issues were resolved. During that pause Shaw drew laughter from the crowd as he welcomed then to the “small and bijou” venue. “Last year we were in Brazil playing to a hundred thousand people. Now we’re i 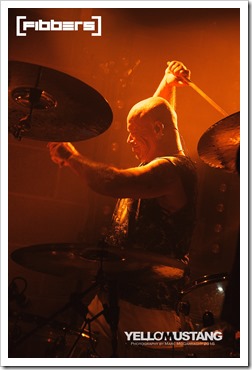 n somebody’s front room,” he quipped good-naturedly. With the sound issues fixed it was back to the new album for The Law, which saw Box nonchalantly laying down an impressive guitar line during a short instrumental section before Russell Gilbrook produced a rousing drum-line to lead the track out. The title track of the new album sounded great but it seemed to me that the older, classic tracks were getting the bigger reception and none more so than “the hit” as Sunrise was greeted by another sea of arms and ended with Shaw’s impressively held final note. The opening notes of Stealin’ were greeted by cheers and the keyboard drenched song saw Box conducting an audience sing-along. Introducing the next song, Shaw explained that 1972 was a big year for Prog-rock and that the band just had to get involved. “Are you standing comfortably? This may take some time,” he grinned as the band launched into The Magician’s Birthday. Partway through, most of the band left the stage, leaving Box and Gilbrook to perform another impressive instrumental section, which was matched only by Shaw’s vocal performance during the second half of the track. “Does anybody write songs like that anymore?” asked 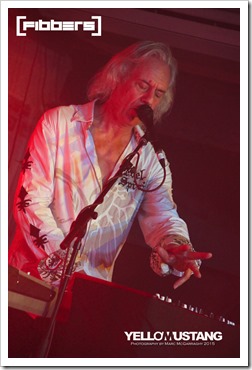 Shaw before comparing it to What Kind Of God, from 2008’s Wake The Sleeper. It’s a brilliant song and, if I’m honest, I think I prefer it to The Magician’s Birthday, but they each belong to their era. Tonight, once again drenched in Phil Lanzon’s keyboards, it included another impressive instrumental section, this time from the full band. Two more songs from The Outsider followed, with Lanzon providing the piano opening for One Minute and then the energetic Can’t Take That Away, during which Shaw’s performance continuing to be cheekily endearing. Every track seemed to end with him flashing a big grin and a thumbs-up to the crowd. Going almost back to the beginning, we got July Morning, its unmistakable seventies sound sitting comfortably alongside the newer, rockier tracks. Finally, eleven songs in and with the set drawing to a close, Box, having switched to acoustic guitar, spoke, thanking the crowd for coming out and paying a short tribute to the late Bolder before introducing Lady In Back and another audience sing-along, again conduced by Box who, at times, also seemed to conducting his own guitar-playing. 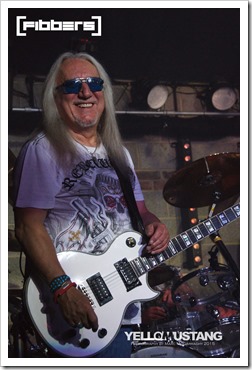 Appropriately it was Box who was first back on stage for the inevitable encore, introducing Gypsy as the band’s anthem and then segueing it into the, to me, more recognisable Easy Livin’ which, in turn, ended with short blast of Land Of Hope And Glory. The evening ended with the band taking a bow and then taking time to acknowledge the crowd, shaking hands and giving away drumsticks. Veterans they may be, with two of the band already in, and another approaching, their sixties but Uriah Heep are showing no signs of growing old gracefully and are still more than capable of putting on a great and thoroughly enjoyable rock show. Long may they continue to do so and I, for one, hope it isn’t another six years before they come back to York.

Regular gig-goer in York, both to see local and touring bands. Huge music fan, with more CDs than my wife thinks any one person should own. I also collect American comics, read a lot of SF and fantasy and am a season-ticket holder at Leeds United.
View all posts by Ian →
This entry was posted in Live Music and tagged Blurred Vision, Fibbers, Uriah Heep. Bookmark the permalink.