Once again a lack of pre-gig research led to me being surprised by a support act. Given she was touring with King King, I assumed Rebecca Downes would be a blues artist in the style of Chantel McGregor or Joanne Shaw Taylor – my only other exposures to female blues – and would front a trio, guitar in hand. Instead she stood in front of a five-piece band, providing just vocals. Except there was nothing “just” about those vocals. They were powerful, passionate and, at times, soulful and, because Downes had breaks in her vocals, where McGregor or Taylor would be playing guitar, she was able to show a different type of expression, almost using her mic stand as a prop. The look of the band – the five musicians all in white shirt and all but one in black tie, Downes herself starting off in a soon-discarded leopard print jacket – perhaps suggested a “classier” venue than Fibbers, but the audience lapped up the performance. After a pop-blues opener, Fever In The Night gave us the first evidence of the power of Downes’ vocals, along with a nice guitar and keyboards mix, and it received a great reception from the crowd. Another Piece Of My Heart – “The only cover we do.” – was followed by Basement Of My Heart, with a faster, train-like rhythm to its drum line, while Walking With Shadows, introduced as, “A bit of an emotional song,” contained the first guitar line that, if I had heard it blind, would have brought to mind what I personally (with my still limited knowledge) would recognise as the blues. It also showed that Downes can do subtle as well as powerful.

Taken from an upcoming second album, Night Train showcased the more soulful side of her vocals, while Back To The Start, the title track of her debut album, returned to a more pop-blues style. The set was brought to a close by A Thousand Years, with a simple piano and vocals opening and an ending which saw Downes, thanking the crowd, leaving the stage while her band performed a short instrumental.

This wasn’t a bad opening to the evening but, from a personal point of view, it was confusing as a blues performance. It was the first time I’ve seen a blues band whose leader didn’t play an instrument and that seemed to lead to the vocals being the most important part of the performance. What instrumental sections we heard were short, with none of the extended guitar or keyboard solos of other blues acts I’ve seen. It might just have been my lack of experience with the genre but, somehow, it felt… just a bit wrong. The music, however, was good and, given the plaudits being bandied around by those more knowledgeable than me, maybe it’s a format that I need to get used to.

“It’s very warm in here,” commented Alan Nimmo, partway through King King’s set, “and I’m wearing a skirt…” Yes, the jovial Glaswegian was back, once again kilted and fronting

my favourite male blues outfit. And one of the reasons it was so warm was that this was the second blues gig at Fibbers this year that had drawn in a bigger-than-usual crowd. Even Nimmo seemed surprised by – and grateful for – the turnout. “The last time we were in York there were about thirty people watching,” he quipped before thanking us for coming out and supporting live music. In actual fact, the last time they played York was in support of John Mayall and there were a few hundred in the audience, but I knew what he meant and I’m not going to argue with the big Scotsman, jovial or not.

Earlier he had walked, almost unobtrusively, on stage, acknowledging the applause from the crowd and the bigger cheer when he was ready to start. “I was just negotiating my way through that tiny wee gap,” he said before starting proceedings with Lose Control and a guitar line that, to me, was more instantly recognisable as blues than anything in the earlier set. Already this was what I had come to expect from a blues act – guitar interludes, a certain vocal style and, in the case of King King, Bob Fridzema’s Hammond organ weaving lovely sounds through the tracks. The crowd had stepped up their enthusiasm and the end of the second track was greeted with almost deafening applause and cheers. The beginning of Waking Up saw a seemingly spontaneous clap-along being encouraged by Nimmo while during Rush Hour, taken from Reaching For The Light, released just a few months ago, I spotted one woman on the front row dancing and singing along to every lyric, something she continued to do throughout the set. (Look closely and you can see the lady in question in the photo below.)

More Than I Can Take saw a change of tone and pace. We were only five tracks in and yet the band weren’t holding back, performing a much rockier version that I remembered and one that could easily have been a set ender and which was greeted by another huge 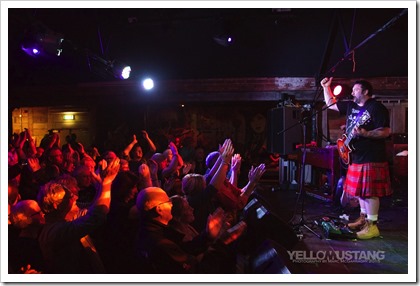 roar from the crowd. After a piano opening, Lay With Me built in volume and moved to that Hammond Organ sound, perhaps inevitably bringing to mind Procul Harum’s Whiter Shade Of Pale. Nimmo moved to the front of stage for a subtle and yet growing guitar section, with his trademark accompanying facial expressions. Hurricane, recently added to Planet Rock’s playlist, was short and sharp in comparison. Before You Stopped The Rain, Nimmo explained that it was dedicated to, “…anybody who has struggled with health. It’s about strength and resolve and dealing with an horrendous illness without complaining.” There was applause and a shout of, “Stevie” from the audience – presumably that is Nimmo’s brother, who had an operation for cancer a few years ago, when the lyrics were written. The screaming guitar was backed by a prominent and yet not intrusive bass from Lindsay Coulson.

“I suppose some of you know that I’m a Scotsman,” joked Nimmo before telling us about childhood musical heroes and how one of them, Frankie Miller, had said, in typical Scottish style, that Jealousy was, “A f**king belter!” I find it hard to disagree. Another track from the new album was followed by a journey back to the first and All Your Life saw the crowd engaged in another clap-along to the almost funky keyboard opening and another potential set-ending instrumental section. Nimmo then explained that blues will never die, as long as it is played from the heart and that Stranger To Love is played exactly that way. With A

Long History Of Love dropped from the live set, it was this track that featured my favourite guitar section of the night. Subtle and perhaps not as intricate as earlier ones, it left space for the notes to breathe and was no less impressive for it. With almost precision timing a Fibbers staff member turned off that infamous aircon unit during the quiet section, just as it seemed as though Nimmo had turned off all amplification and all we could hear was the sound of bare strings being plucked before the volume was increased once more, and more cheers rang out from the crowd. This, it seemed, was the set ender.

It wasn’t long, however, before the band were back on stage, Nimmo returning with arms held aloft before thanking us again for supporting live music and warning us that if we didn’t join in with Let Love In he would show us what was under his kilt. Inevitably, threat or no, the audience rounded out the evening with an enthusiastic sing-along.

This was the third time I’ve seen King King and they have got better every time. My worry is that if their audiences keep getting bigger, York’s venues aren’t going to be able to hold them. My only complaint, as with another blues gig earlier this year, was the pricing structure for CDs on sale at the gig. I had every intention of buying Reaching For The Light tonight but, at £15 on the merchandise table, it is cheaper, even including postage, to buy it from the band’s website and I’m certain I didn’t pay that amount for the previous albums at an earlier gig.

Regular gig-goer in York, both to see local and touring bands. Huge music fan, with more CDs than my wife thinks any one person should own. I also collect American comics, read a lot of SF and fantasy and am a season-ticket holder at Leeds United.
View all posts by Ian →
This entry was posted in Live Music and tagged Fibbers, King King, Rebecca Downes. Bookmark the permalink.